Skip to content
You are here:Home/Finance/Mexico: The minimum wage rises to 88.36 pesos

In the past years, the minimum wage had been raised more-or-less in line with inflation, to avoid social issues and not cause an increase in prices and wages which would eventually have the most impact on the lower social classes. The government considered that the country has favorable economic conditions to consider this increase, regarding the great performance of the internal and external economic activity.

Looking forward, the experts estimate Minimum Wages in Mexico to stand at $ 88.36 for the next 12 months. In the long-term, the Mexico Minimum Daily Wage is projected to trend around $ 102.24 mexican pesos in 2020, according to the econometric models. 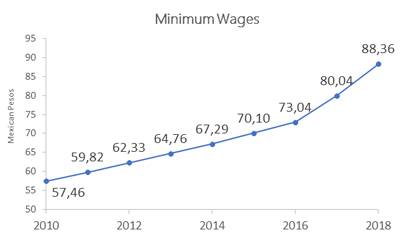 BASIC DATA PROTECTION INFORMATION
CONTROLLER: AUXADI CONTABLES & CONSULTORES S.A.; PURPOSE: Send you news, publications, offers and/or services provided by AUXADI; LEGITIMATION: Consent of the data subject; LEGITIMATION: Consent of the data subject; ADDRESSEES: Auxadi Group companies; RIGHTS: Access, rectification, erasure, opposition, restriction and portability, as explained in the additional information; ADDITIONAL INFORMATION: You can consult the additional and detailed information on Data Protection on our website: Privacy and Data Protection Policy; CONTACT: To exercise any of your rights or to consult any doubt regarding data protection, send us an email to GDPR@auxadi.com.