Skip to content
You are here:Home/Latest news/Paternity leave will be effective provided that the established period of contribution is fulfilled

In the use of its jurisdictional powers, the Supersalud clarified that one of the requirements for the paternity leave to be effective is that the father has begun to contribute at least two weeks before the mother’s birth, due to the ambiguity of article 236 of the CST.

The figure of paternity leave was derived from the protection granted by the State to the pregnant mother, since the first aid recognized to the man on the occasion of the birth of his son constituted, basically, an extension of the right to the maternity leave. The period of this leave is 8 days counted from the birth of the baby and every employer is obliged to grant it.

Prior to Law 1822 of 2017, article 236 of the CST had been modified by Law 755 of 2002, also known as the Maria Law, this law created the paternity leave and established on the EPS the obligation to pay it; however, initially there were more requirements to access it than today. Let analyze the normative change in the following table: 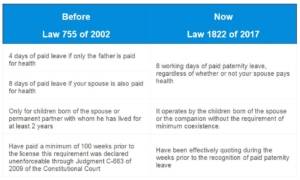 Law 1822 of 2017 did not literally determine the minimum contribution period, the requirement was established in an abstract that was very broad in expressing “previous weeks” and in the analysis that the National Health Superintendence in Reference Judgment 1-2016-070000 (J-2016-0954), clarifies that the license corresponds to at least 2 weeks when it states that:

“As of 2011, a prerequisite for access to the paternity leave was the minimum contribution of the two weeks prior to childbirth, without the admission of interpretations supported by judicial pronouncements that are not in force or in previous regulations that regulate different legal situations”.

When the Superintendence of Health refers to the requirement was established as of 2011, it does so based on Law 1468 of 2011 which also modified, among others, Article 236 of the CST, which at the time indicated the requirements, beneficiaries and responsible for payment, namely:

What happens to this leave when the mother dies or becomes sick?

The law foresees contingencies that do not escape labor, these are those that occur when the mother dies or becomes sick at the time or time after the birth of the baby. Recognizing the above, paragraph 4 of article 236 of the Labor Code – TS, which was amended by article 1 of Law 1822 of 2017, states that the guarantees given to mothers will be extended to the father when this is in charge of the newborn due to illness or death of the mother, and the leave (or whatever remains of it) will run right from the moment the father becomes custodian of the newborn.

Thus, maternal leave is extended to the father in case of death or illness of the mother, in which case the employer of the infant’s father is obliged to grant him a license equivalent to the time remaining to expire the period of the subsequent leave to the birth granted to the mother.